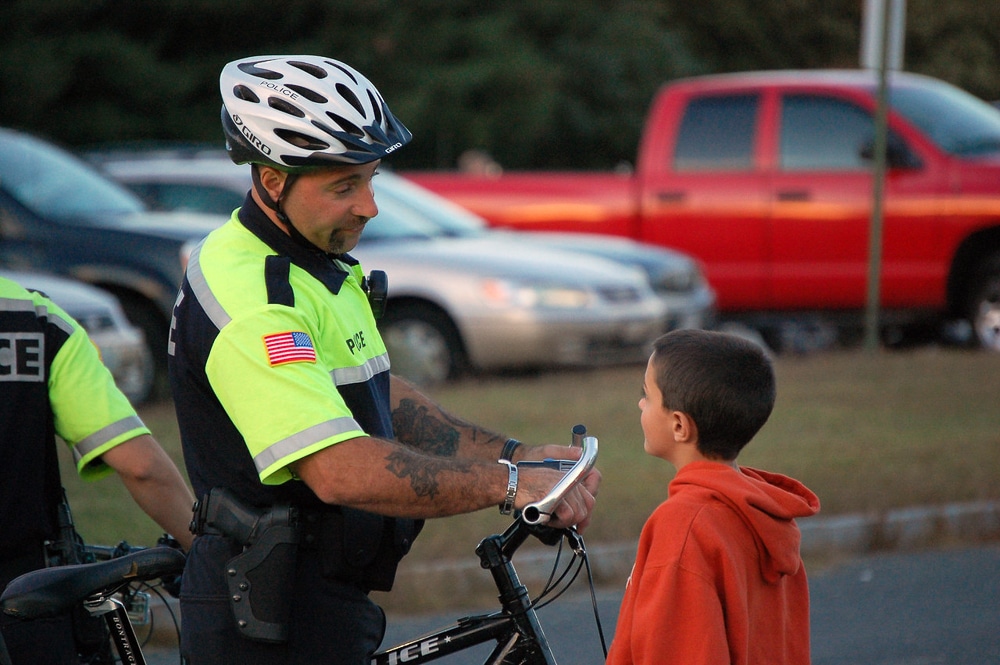 A member of the Billerica Police Auxiliary Unit speaks with a child while patrolling on a bicycle at a community event. (Photo Courtesy Billerica Emergency Management)

The auxiliary unit in Billerica has been around for about 45 years, the last 30 of which were under direction of Emergency Management Director Bill Laurendeau and the Billerica Police Department.

The unit has about 20 members. New state regulations put in place by the Massachusetts Police Training Committee as part of police reform efforts have made it difficult or impossible for most of the unit’s members to continue serving in a police role, according to Police Chief Roy Frost and Director Laurendeau.

Director Laurendeau and Chief Frost said Billerica’s auxiliary officers have been invaluable over the years, assisting the town with everything from community events, to large-scale police search efforts for missing or endangered residents, such as Alzheimer’s patients, and even with things as small as shoveling and elderly resident’s driveway so a fuel truck can get in.

Chief Frost said the Auxiliary Unit was a tremendous help in 2012, when Billerica Police were investigating a home invasion and homicide in the Pinehurst neighborhood, and needed to search a large section of woods near the scene while looking for a firearm.

“It was full of poison ivy but they still went in and did the search as volunteers. There were about 10 auxiliary officers who spent an entire day going through a pretty large wooded parcel, and it was all free to the Town of Billerica,” Chief Frost said, noting that the investigation led to the conviction of six individuals who were involved in the incident.

Director Laurendeau said more than a dozen members of the Auxiliary Unit meet monthly to train for search and rescue. They also work and train with Billerica K-9 units and other search and rescue teams in the region to keep their skills sharp.

“They regularly go on their own time to training sessions both indoor and outdoor, so that when they arrive at a scene they’re not just bodies being there,” Laurendeau said. “If Billerica asks them to go out and do a grid search, they know what to do and what not to do.”

“They do it all on their own time,” said Chief Frost. “It’s just a service for the Town of Billerica that these guys provide at no cost whatsoever.”

“We’re having recruitment and retention issues across the state and country,” Frost said. “The Auxiliary Unit is an organic repository of qualified, motivated, tested people that we could recruit from.”

Chief Frost said numerous officers have been hired from the auxiliary ranks. Two officers who are bilingual — one speaks Mandarin and another speaks Spanish — joined the full-time force after serving as auxiliary officers and impressing commanders.

“These kinds of opportunities are invaluable for the police department not only because of the volunteerism, but as a recruitment tool,” Chief Frost said. “We’re really concerned about losing these types of programs, but we have to work within the parameters of the new state regulations.”

MA-VLEOA is fully supportive of additional training requirements for reserve officers that were implemented as a result of the Massachusetts police reform law, but is pushing for the state to make the hands-on training included in the requirements more widely available on nights and weekends to facilitate the needs of reserve officers who have other full-time careers. The organization is also concerned about requirements that reserve officers have at least 2,400 hours of experience with arrest powers by January 2027, because many of the state’s reserve officers do not work enough hours to meet the requirement. If Reserve Officers do not meet that experience requirement, they must attend a full-time police academy under the new regulations. Reserve and auxiliary officer units around the Commonwealth have begun to disband due to the new requirements, and unless changes are made to accommodate volunteer officers many more unit closures are expected, with taxpayers expected to feel a financial impact due to the loss of the volunteer services provided by these units.

“I definitely understand the intent of it and commend the state for putting together a basic level of certification for our day-in, day-out police officers, but there’s also this huge piece that kind of got left to the side — these volunteers who do auxiliary policing,” Chief Frost said. “I wish there was a way to address that in a safe way that also allows these individuals to serve their community.”

Chief Frost and Director Laurendeau said auxiliary officers in Billerica are extremely motivated and willing to undertake whatever training they need, but that they also have other full-time jobs that make it difficult if not impossible to attend the roughly 200 hours of Bridge Academy training that is now required, but in large part only available during weekdays.

“I think the consensus around the state is that everyone is in favor of additional training, but the 2,400 hours is almost impossible for some communities to be able to achieve,” Director Laurendeau said. “A lot of these guys really love the job and would be willing to make any sacrifice they can, but many of them are also young family guys and they just can’t take that much time off work and away from their families.”

Despite those challenges, the service that members of the Auxiliary Unit have provided to Billerica make both Chief Frost and Director Laurendeau hopeful that a solution can be found so that dedicated community members can still contribute.

“We’re not giving up on it,” Chief Frost said. “We’re hoping the Legislature will consider relaxing some of the hours requirements for certification of part-time officers and that they figure out a modified certification standard for people who work in this capacity.”

The Massachusetts Volunteer Law Enforcement Officer Association continues to call for the MPTC to make in-person training for reserve police officers available at more flexible times and locations, so that officers with full-time careers can schedule the training they are required to receive, and for the MPTC and other stakeholders to reconsider the number and type of required hours of experience needed to be trained and certified as a reserve officer.

“Auxiliary and Reserve Police Officers all over the Commonwealth have provided competent and dedicated volunteer service for decades, and the Billerica Auxiliary Unit is a great example of that,” said President Spigel. “We agree that all law enforcement officers must be rigorously trained for the duties that they are asked to perform, and we hope the MPTC and other stakeholders will work with us to find a way forward for these dedicated public servants and all others like them.” 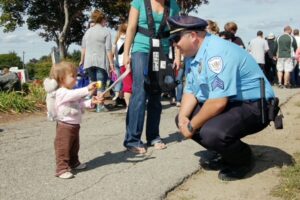 A member of the Billerica Police Auxiliary Unit, speaks with a child at a community event. (Photo Courtesy Billerica Emergency Management) 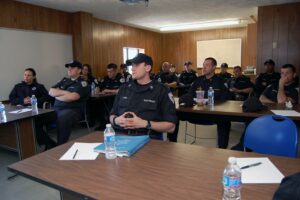 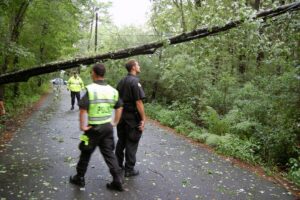 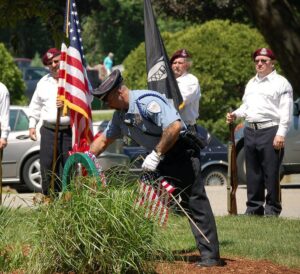 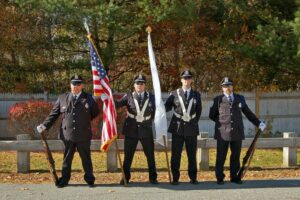 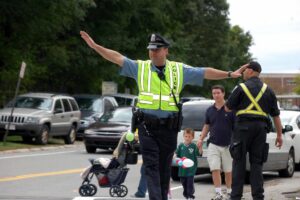 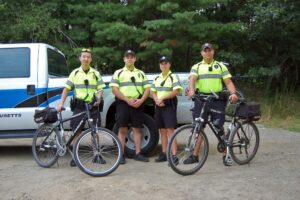