Idemia, located in Bedford (formally Billerica) has donated another year of support services for the department’s live scan fingerprinting system that Idemia manufactures. The system was purchased by the Commonwealth as part of a statewide project. The original purchase included three years of support services which expired. The donation will continue support for another 12 months at no charge to the Town.

The Police Department would like to thank Idemia publicly for this generous donation as well as other past donations and technical assistance they have provided over the years. They are a great neighbor and partner.

Idemia is a leading provider of identity solutions and services in the United States. For more information about their services and products please visit their website here.

I am writing to comment on the recent release of Body Camera footage from the City of Memphis Police Department in Tennessee that depicts the actions of several Memphis Police Officers arresting Tyre Nichols for an alleged traffic incident on January 7, 2023. The actions of these officers resulted in Mr. Nichols suffering severe injuries that resulted in his death three days later at a Memphis hospital. On Wednesday, January 25, a Shelby County Grand Jury indicted five Memphis Police Officers in the death of Tyre Nichols, charging them with second-degree murder, aggravated assault, aggravated Kidnapping, official misconduct and official oppression.

I would note that Memphis Police Chief C.J. Davis quickly launched a comprehensive investigation into this incident, which included immediately suspending the involved officers and opening a criminal Grand Jury in cooperation with the County District Attorney. All five involved officers were subsequently fired on January 20, with the above charges being brought by the Grand Jury five days later on January 25th. With the release of the Body Worn and Pole Camera video, Chief Davis has publicly called the officers’ actions “heinous, reckless, and inhumane” and said, “In my 36 years, I would have to say I don’t think I’ve ever been more horrified and disgusted.”

I want to convey to our residents that I, along with my fellow Massachusetts Law Enforcement leaders, condemn the actions of these Memphis Officers. Both the Middlesex Chiefs Association and the Massachusetts Chiefs of Police Association have publicly stated in the past 24 hours its commitment to holding police officers accountable for their actions through a “fully transparent” investigation into what transpired. Police leaders in Massachusetts have long supported transparency and oversight in policing with the goal of establishing strong relationships with those we serve on a daily basis. After many years of requests, the Massachusetts Legislature has delivered a Peace Officers Standards and Training Commission (POST) tasked with establishing nationally recognized best practice standards in recruitment, training and oversight of those trusted with policing in our Commonwealth. Specific parts of police reform included strict legal requirements for officers to intervene when observing fellow officers using excessive force, in addition to mandates that require officers to employ de-escalation techniques in all use of force situations. Moreover, the Billerica Police Training Division has heavily invested in its officers’ preparation through the use of multi-week scenario-based training. This training works to develop and evaluate an officer’s ability to safely handle some of the most volatile situations they may encounter in their roles.

We realize that these types of horrific incidents can significantly erode the trust and legitimacy our officers work hard to build with the residents they serve. I want to ensure the community that we are committed to re-building that trust. Please know that I am here to answer any questions you may have about our commitment to that goal. I can be reached best through my email at rfrost [@] billericapolice.org.

BILLERICA 一 Chief Roy Frost reports that the Billerica Police Department arrested and charged a man after he allegedly attempted to steal from a senior resident using the increasingly common grandparent scam.

TONY MEJIA, AGE 37, OF BOSTON, was arrested and charged with:

On Thursday, Jan. 5, at about 9 a.m., Billerica Police were notified that a 79-year-old resident had received a call from a man claiming to be their grandson, “Bobby.” Police learned that individual claimed he had been arrested for striking a pregnant woman with his car while drunk. He said he was ashamed of what happened, and told the resident that they should not contact anyone else or tell anyone what happened.

The resident has no grandchildren.

Billerica Police detectives responded to the resident’s home, and listened as she called a phone number for an attorney that “Bobby” had provided.

The second individual told the resident their grandson needed $6,000 in bail money to get out of jail, and offered to send a courier to their home to pick up the money.

The courier, later identified as MEJIA, arrived at the home later the same day and accepted a manila envelope full of what appeared to be cash. MEJIA was taken into custody by Billerica Police as he drove away.

MEJIA is scheduled to be arraigned Friday in Lowell District Court.

Grandparent scams and bail scams, as they are commonly called, target grandparents and family members with stories of a grandchild or relative being in urgent trouble, often under arrest. The scams request bail money be provided urgently, and scammers often encourage would-be victims not to contact police or other family members.

“This is a classic example of the grandparent and bail scams that have targeted at least 25 people across Eastern Massachusetts recently,” said Chief Frost. “The resident who was targeted in this instance did exactly the right thing when she immediately called Billerica Police, and helped us make an arrest in an increasingly common type of activity that targets seniors in our communities.”

Billerica Police would like to share the following tips from the Federal Trade Commission regarding these types of scams:

• Resist the urge to act immediately, no matter how dramatic the story is.
• Verify the person’s identity by asking questions that a stranger couldn’t possibly answer.
• Call a phone number for your family member or friend that you know to be genuine.
• Check the story out with someone else in your family or circle of friends, even if you’ve been told to keep it a secret.
• Don’t wire money – or send a check or money order by overnight delivery or courier.
• Remember that police and the courts never take payment by prepaid gift cards.
• Report possible fraud at ftc.gov/complaint or by calling 1-877-FTC-HELP.

For more information on grandparent and bail scams, click here.
Residents who believe they may have fallen victim to such a scam are encouraged to contact the Billerica Police Department at 978-671-0900.

These are allegations. All suspects are considered innocent until proven guilty.

The Billerica Select Board and Town Manager John Curran with Billerica Police and a flag presented by Cops for Kids with Cancer at the Board of Selectmen meeting on Monday night. (Courtesy Billerica Police Department) 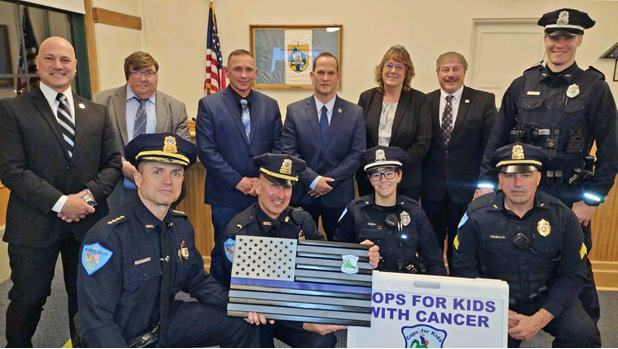 BILLERICA 一 Chief Roy Frost is proud to announce that the Billerica Police Department was recognized by Cops for Kids with Cancer, a non-profit that works to support the families of children with cancer, at the Billerica Select Board meeting this week.

Cops for Kids with Cancer began as a bet between two police officers in Boston who gave funds to hospitals to support pediatric cancer patients, and later began supporting families directly. The 501(c)(3) charitable organization has since supported 914 families with over $4.75 million in funds that are provided no strings attached to support families in any way they need, whether that be for transportation, food, or incidental costs that often get overlooked as families focus on medical bills. The organization provides families with a $5,000 check to spend as needed.

“Cops for Kids with Cancer has helped us focus on one of our priorities, which is being there for our community,” Chief Frost said. “No one is more deserving than families dealing with the tragedy of a cancer diagnosis in a child.”

Billerica Police have supported Cops for Kids with Cancer for about 15 years. For about half of that time funding for the non-profit has come from all sworn officers of the Billerica Police Department contributing $2 per week from their paycheck. Most departments contribute to the organization via fundraisers and events, but Billerica Police wanted to establish more consistent funding.

“Sgt. Mark Tsoukalas came up with the idea of donating a small piece of our paychecks every week — just a small amount — so we could have guaranteed income for our donations to the organization,” Frost said. “Now we’re able to fund a $5,000 check for a family on a yearly basis.”

Sal Mirabella Jr., a sergeant with the Emerson College Police Department and a member of the Board of Directors for Cops for Kids with Cancer, said Billerica Police have donated $24,481 to the nonprofit since January of 2016.

“Cops for Kids with Cancer recognizes police departments who contribute a significant amount to our organization, and it was long overdue that we recognized the Billerica Police Department for what they have done for more than a decade,” Mirabella said. “They donate to us weekly, and it’s departments like that which we really rely on.”

Mirabella said any police department in New England can sponsor a family with a child under age 21 who is battling cancer. Departments do not have to have previously contributed in order to sponsor a family. Cops for Kids with Cancer currently provides a $5,000 check to eight families per month across New England.

“The need is there, and we have the ability to make an impact,” Frost said.

About Cops for Kids with Cancer: 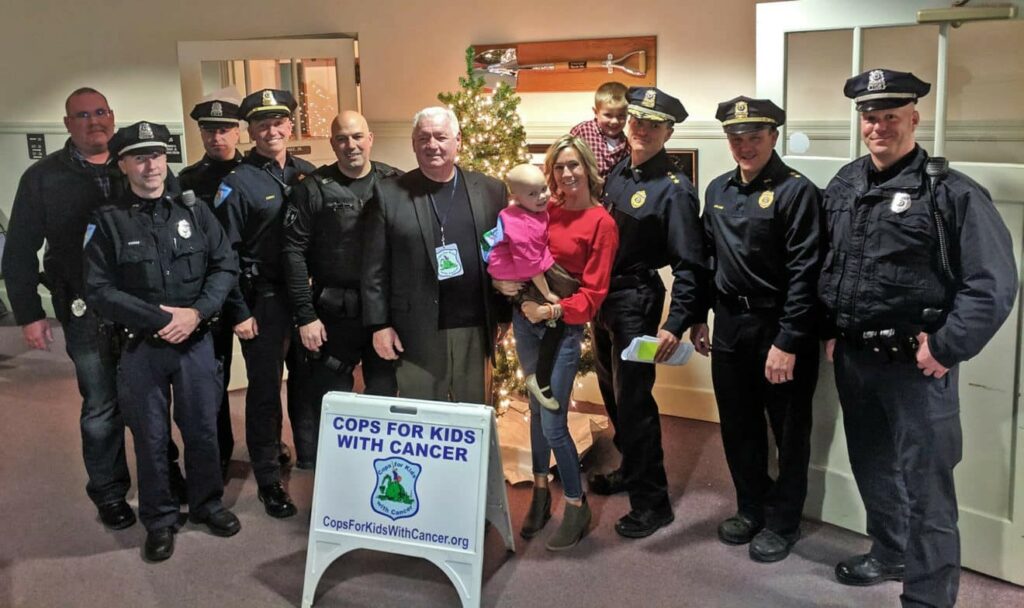 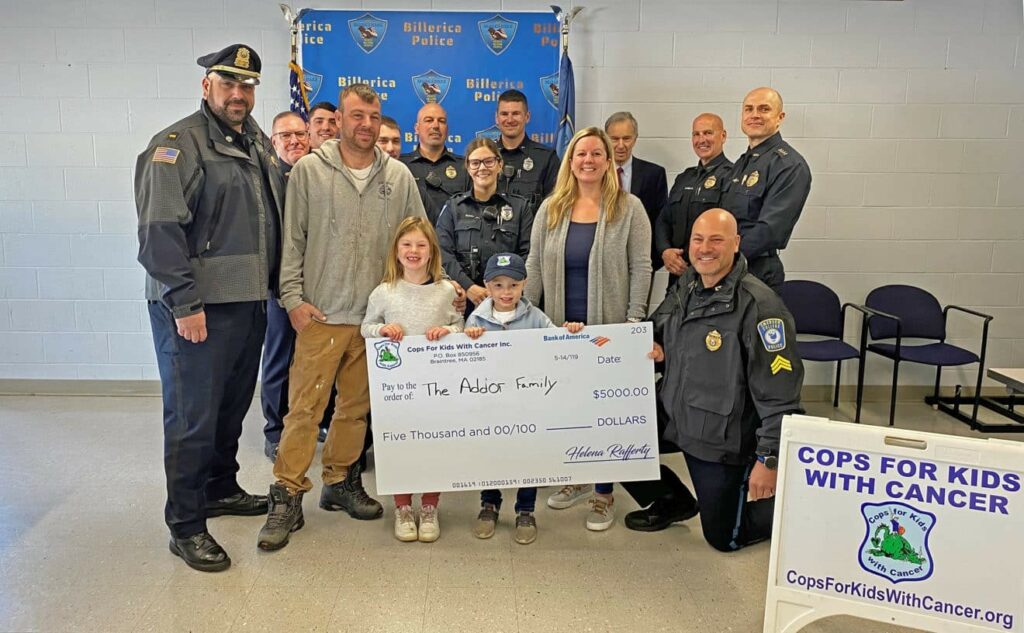 If you are interested in learning more about the TCP, please see the dates listed below to attend a 2-hour informational workshop that will explain the program. Please email 911training@mass.gov to reserve a seat. A confirmation email will be sent back to you confirming that you are registered for the workshop. 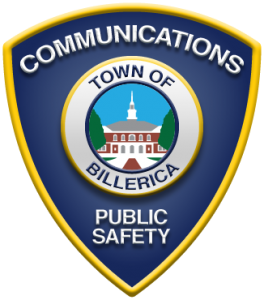 Candidates for this position should have at least a High School Diploma, be 21 years of age at time of employment, and possess a valid driver’s license. Prior experience as a 911 dispatcher is preferred but not required for full time positions.

An application may be obtained from the Town Manager’s office or can be downloaded here:

Minimum Qualifications: Candidates for this position should have at least a High School Diploma, be 18 years of age at the time of employment and possess a valid driver’s license. 2 – 4 years prior experience as a 911 dispatcher is preferred but not required.

Shifts – Work shift is subject to bid by seniority. Telecommunicators work four days and have two days off for a six-day work week. Shifts are 11pm – 7am, 7am – 3pm and 3pm – 11pm.

Additional Requirements: Certification in enhanced 9-1-1 systems in the Commonwealth of Massachusetts and APCO Emergency Medical Dispatch is preferred.

Application deadline: Positions will be posted until filled

If interested you should send a cover letter and resume to Michele Rivera, Human Resources Director,

The Town of Billerica is an Equal Opportunity Employer