Billerica – On Monday, October 4, 2021 at approximately 3:55 AM Billerica PD received a call from a commercial alarm company reporting an alarm activation at Speedway Gas Station, located at 192 Boston Road, North Billerica with an unknown male suspect reportedly stealing items from the closed store. Officers immediately responded to the alarm, arriving within 3 minutes. On arrival to the area officers observed the front glass door to the gas station smashed out, allowing full access to the Speedway store.

Responding officers immediately identified a suspect motor vehicle fleeing from the scene at a high rate of speed headed northbound on Boston Road towards Lowell. Upon activating their emergency lights in an attempt to stop the fleeing motor vehicle, officers traveled northbound on Boston Road where they observed multiple damaged residential trash receptacles and garbage in the roadway along the path the suspect vehicle had fled. Immediately north of The Point at 3North, an apartment complex located at 71 Boston Road, Officers came upon the suspect vehicle, which had apparently crashed into a telephone pole on the southbound side of the roadway. Officers observed multiple electrical transmission wires that were suspended by the telephone pole now coming down just over the crashed vehicle. The suspect vehicle was heavily damaged from the crash and was occupied by two suspects who were trapped inside the vehicle. The roadway was immediately shut down and the scene secured while Billerica Fire emergency crews and EMS personnel were dispatched to assist with the extrication of the occupants. National Grid was also summoned to the scene to assist with the downed power lines. After about 40 minutes on scene, crews were able to extricate a male operator and female passenger from the vehicle, both of whom suffered unknown injuries. Both individuals were subsequently transported to Lahey Clinic for emergency medical treatment. At this time the incident is under investigation by the Billerica Police, along with the assistance of the Massachusetts State Police Collision Analysis and Reconstruction Section (CARS). No further information is available at this time.

Any additional questions should be directed to Deputy Chief Roy Frost, 978-215-9653 or via email at
rfrost @ billericapolice.org 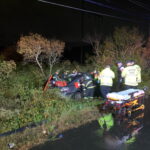 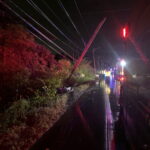