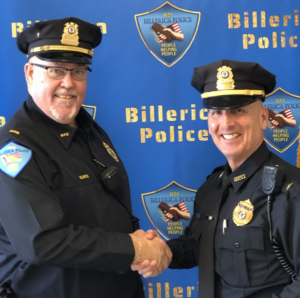 Billerica – Effective Sunday, December 5, 2021, the Billerica Police Department has promoted two veteran Police Officers to the rank of Lieutenant. Acting Chiefs Ronald Balboni and Troy Opland are honored to announce the promotions of Steven Elmore and William West. Lt Steven Elmore is a 34-year veteran officer with the Billerica Police Department, having served the past 21-years in the rank of Sergeant. Prior to his promotion, Lt Elmore has overseen the department’s Traffic Bureau, which is responsible for all matters related to traffic safety and enforcement. In addition to his time overseeing the Traffic Bureau, Lt Elmore served the department as a patrol supervisor and also completed multiple assignments in the Criminal Investigations Bureau.

Lt William West is a 28-year veteran officer with the Billerica Police Department and also a military Veteran. Prior to his promotion, Lt West served his last ten years as a Patrol Sergeant where he supervised patrol officers in their day-to-day operations. Prior to his assignment as a Patrol Sergeant, Lt. West served twelve years as a Detective in the Criminal Investigations Bureau.

Both Lieutenants Steve Elmore and William West are life long Billerica residents where they live with families. Both are very active in the community and represent the best of the Billerica Police. We are all very excited for their promotion and congratulate them on this impressive accomplishment.